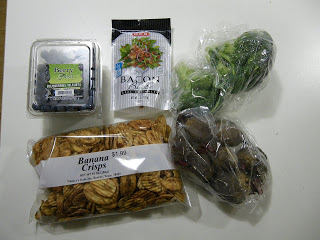 Day 2: The ‘B’eezneez
The picture above shows my meals for the day. They were divided as such:
Breakfast: Fresh blueberries
Lunch: Big bag of banana crisps. Had I realized I would be at lab as late as I was I probably would have supplemented it with Matt’s offer to grab a Chipotle burrito after class.
Dinner: Broccoli and baked beets with bacon bits heated in butter. Tasty way to finish off the day. 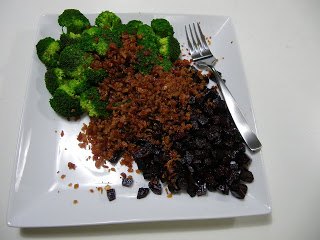 Two down, twenty-four to go. (Cue clock noise from 24.) Thanks for all of the suggestions for ‘D’ day. I’m heading to the grocery store to pick up my CSA tomorrow (http://www.jbgorganic.com/) [which should be interesting to integrate into dishes in the next week or so] and will see what I can find. While some of the high point Scrabble letters (e.g. Q, Z) in the future are surprisingly easier than might first be imagined (quail, quinoa & quiche, zita, & zucchini), the one I’m having trouble with is ‘X’. I can’t think of any ingredients but perhaps there are mysterious ethnic dishes out there that have eluded me. I’ll keep you posted.
As a final side note: I’m working on my Oscar menu which happily is on the 27th this year and thus the day after this challenge is complete. For those who have not partaken in such a culinary marathon, for the past three years I’ve thrown a Oscar dinner party during (and usually through the course of) the ceremonies that consists of a dish for and themed around each of the Best Picture nominees. The first years grew in challenge as more people began to come (I think somewhere around 24 is my high so far) while last year the Academy must have gotten wind of my masochistic plot and decided to double down and increase the number of nominees to ten. Thus last year and this year ten courses are created. Since this ridiculous notion requires some planning I try to finalize a menu as early as possible and practice as many dishes as I can before the big night. This year there is extra pressure since unless the dishes begin with letters at the end of the alphabet practicing becomes infeasible. So I’m diligently working on creating my final tour de force so that I may have time to rehearse. Should be fun.
Onwards to ‘C’!